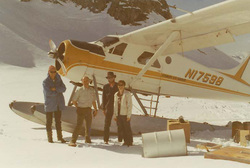 Our Start
Kenmore Air was founded in 1946 by three high school friends, reunited after World War II. With one airplane, and a single hangar near a swamp at the North end of Lake Washington, Bob Munro, Reg Collins, and Jack Mines gave birth to what was to become the largest and most respected seaplane airline in the world. As with most great companies, Kenmore Air Harbor's beginnings were modest. The company experienced many anxious moments in its infancy. From re-zoning the shingle mill site to a commercial seaplane base to petitioning the Kenmore community for support, it was a struggle at times to keep the Air Harbor afloat. Working sixteen-hours-a-day, seven-days-a-week left them little time to ponder the future; however.

"Other than Jack's ideas about a hotel we didn't have much of a plan other than Reg and I would fix planes and Jack would give flying lessons. We just assumed it was going to work." Bob Munro

From the beginning, Kenmore Air's business philosophy was based on the foundation of integrity and exceptional customer service. The company kept it simple: "do the right thing".
​
Increasing Reputation
In the 40's, Kenmore Air became a Seabee dealer for the Northwest, and quickly the Republic Seabee amphibian became a huge success in the area. Kenmore Air also became experts on Seabee repairs and maintenance for the local Seabees, and developed a number of modifications to improve the performance. By the early 1950's, Kenmore signs on as an aircraft and parts dealer for the popular Cessna and expands into the charter business with flights and hunting spots throughout the Northwest. Several years later, Kenmore furthers their expansion with a new hangar and office building, and in 1963 Kenmore acquires its first Beaver, leading to a rebuilding and modification program specifically for this plane. Over the next two decades, Kenmore Air significantly expands their scheduled service offerings, and acquires two airlines: Otter Air, a small seaplane company offering scheduled service to Victoria, B.C., and Lake Union Air. With the acquisition of Lake Union Air, Kenmore acquired its Seattle terminal and all but one of its aircraft. Several more Turbo Otters are added to the fleet to meet increased passenger demand

Kenmore Today
Kenmore Air Harbor is a business so emblematic of Kenmore that a seaplane is part of the city logo. Seattle Post-Intelligencer Today, Kenmore Air is among the best-known and most respected float plane operations in the world, flying an eclectic mix of piston Beavers and turbine Otters and Caravans, landing passengers on glaciers, lakes and harbors among the mist-shrouded fjords and islands of the U.S. and Canadian northwest. Kenmore Air continues to be the world standard by which floatplanes are judged, and is renowned for its superior expertise in plane maintenance and construction. Kenmore Air currently has 25 aircraft in operation, 52 pilots on staff and more than 250 employees in peak season. The company's philosophy has remained unchanged since its establishment in 1946: do the right thing.