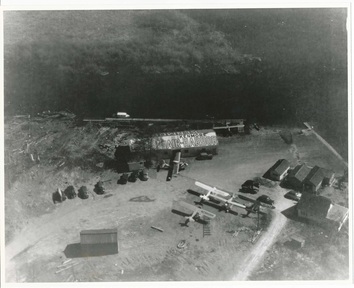 Humble Beginnings
High school friends, Reg Collins and Bob Munro worked as mechanics at Pan Am in the early 1940s. They purchased a wrecked Aeronca K in 1944. The hope was to restore the 40-horsepower floatplane and go into business for themselves fixing small airplanes. But when their fellow high school buddy and pilot, Jack Mines, returned home at the end of World War II, the business idea expanded to include flight instruction and charter work.

And thus, in 1946, the three men founded Kenmore Air at the northern end of Lake Washington. In those early days, the five-acre campus was just a single hangar bordered by a swamp. In its infancy, the company experienced many an anxious moment. The men had to re-zone the site from its previous status as a shingle mill to a commercial seaplane base. They had to petition the Kenmore community for support. And when the weather turned in the middle of the night, as it does sometimes in the Pacific Northwest, they had to scramble from their beds and tie down the planes.

The work was grueling - often requiring the men to work 16-hours-a-day, seven-days-a-week. It left them little time to ponder the future. However, as Munro explained:
​
"Other than Jack's ideas about a hotel we didn't have much of a plan other than Reg and I would fix planes and Jack would give flying lessons. We just assumed it was going to work."

Increasing Reputation
In the 40's, Kenmore Air became a Seabee dealer, servicing the Northwest. The Republic Seabee, an amphibian floatplane, quickly became a huge success in the area. To keep its fleet and its customers’ aircraft in the air, Kenmore Air also became Seabee repairs and maintenance experts. Additionally, they developed a number of modifications to improve the performance of the small aircraft.

By the early 1950's, Kenmore signed on as an aircraft and parts dealer for the popular Cessna. This allowed it to expand its charter business, offering flights to remote hunting and fishing spots throughout the Northwest.

Several years later, Kenmore further expanded its operations with a new hangar and office building. But it was 1966 that was perhaps its most defining milestone of all - Kenmore acquired its first Beaver.

Though Munro was initially hesitant about buying N9764Z in 1966, the purchase lead to the development of Kenmore’s renowned Beaver restoration and modification program.

Over the next two decades, Kenmore Air significantly expanded their scheduled service offerings, and acquires two airlines: Otter Air, a small seaplane company offering scheduled service to Victoria, B.C., and Lake Union Air. With the acquisition of Lake Union Air, Kenmore acquired its Seattle terminal and all but one of its aircraft. Several more Turbo Otters were added to the fleet to meet increased passenger demand.

Still Home on Lake Washington
Today, Munro’s son, Gregg Munro; one of his daughters, Leslie Banks; and one of Munro’s grandson, Todd Banks, continue to operate the business. More than 70 years later, Kenmore Air is proud to still call the northern tip of Lake Washington home. Headquartered in Kenmore, Washington, the business remains a mix of aircraft repair and restoration along with instruction and passenger service.
​
As passengers walk to check-in, they still get a glimpse of the entire maintenance operation. They’ll stroll by a 10-passenger Otter, sitting on floats in the parking lot, awaiting the installation of a 750-shaft-horsepower Pratt & Whitney PT6A-135. They’ll pass a forklift carefully positioning a freshly overhauled Pratt & Whitney R-985 Wasp Jr. on the firewall of a Beaver. Passengers will see a pair of mechanics standing on floats, ready to bolt the 450-HP, nine-cylinder engine to an airframe. Behind a large sliding door, a turbine Beaver can often be seen undergoing a complete restoration, from the reskinned airframe to new avionics. And, it’s not uncommon they’ll witness a Piper Super Cub tied to the dock, waiting for a student who has a floatplane lesson later in the day.